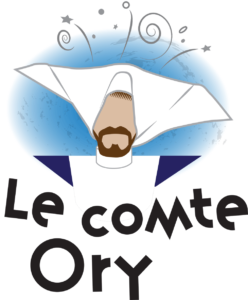 Premiered in 1828 in Paris, Giaochino Rossini’s Le Comte Ory is one of the Pesaro master’s greatest comedies. Carefree, silly & brimming with melody!

The eponymous Count Ory is a wily fraud and womanizer. While all the men in town are called away to war, Ory seizes the opportunity to pursue the now unguarded women of the village.

But they’ve all taken a vow of chastity – even the Countess Adèle, who has the misfortune to have caught the Count’s eye.

With increasingly silly ploys and schemes, including disguising himself as a nun, the Count attempts to seduce the Countess.

All is for naught, and just as a case of mistaken identity comes to a hilarious climax, the rascal is left frustrated.

Starring a veritable who’s who of Opera Southwest’s favorite singers, this will be the eleventh Rossini opera presented by Opera Southwest and conductor Anthony Barrese.

-English translations are projected above the stage for all operas-